Like Loading...
I recently made this fringe purse and am loving the color of that green leather!
It measures 6-1/2″ X 8-1/2″ and the fringe tapers from 9-1/2″ up to 5-1/2″. The strap is round leather, knotting at the back to make it adjustable (pictured, it measures 43″). The long irregular flap lifts up to reveal the unique design of the snap underneath the flap.
Available now…ready to ship!
$65, US shipping is free.

Like Loading...
DID YOU KNOW?
Barn & Beach Designs ROCKS!
This Southport, NC store supports so many local artisans… including me! 🙂
M-Sat 10-6pm
Sundays 12-5 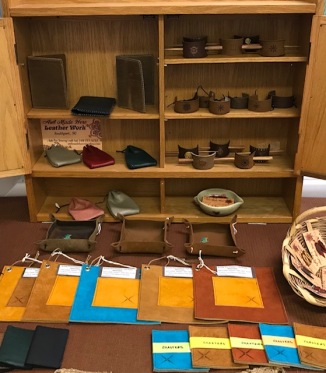 Like Loading...
I make leather journals & notebooks too… this one has a hand-carved leather tree design and it carries a standard 5×8 notepad (included), has a pen holder and a spare pocket. Medium brown leather & tan leather lacing. $70 (PM me if interested). Shipping is FREE
in the US!

Like Loading...
DID YOU KNOW?
LEATHER CHANGES ITS TEXTURE BASED ON THE ENVIRONMENT
As leather contains pores, it changes in texture and appearance depending on what environment it is in. In a fairly humid environment, leather becomes softer as it soaks up the moisture that’s in the air so therefore, a dry environment makes the leather much tougher. So it’s always a good idea to keep your leather items in a suitable environment.

The new paperback thriller Bill & Jessie’s House by author Joyce Keating is a gripping read. Set in an old haunted house in the trendy neighborhood of Georgetown, Washington, D.C., where a young family house sits while the owners tour London, this page turner delivers all the goods of an edge-of-your-seat horror story.
If the goal was to scare the reader, the story certainly accomplishes that. It gave me nightmares. Bill and Jessie invite Morgan, their 33 year old niece and her husband Anders, to house sit for nine days while they vacation in London. Morgan, husband Anders, and son Tyler are the tender family who naively agree to take a vacation in a house well known as haunted in the hopes of breaking up the monotony of what has become a humdrum life in close-by Bethesda.
The experience breaks things up alright; in fact, it downright rattles them. The question of the veracity of ghosts is at first playfully toyed with by the young couple. Like many people, they respond to the evidence of paranormal activity with denial, which keeps them staying in the dreadful house longer than they should. Then bad things start to happen.
I had a conversation with Keating about her second publication, and first work of fiction. Her interest in the paranormal goes beyond just writing a hair raising story. She says she has had paranormal experiences herself. “I have witnessed too many things over the years to simply disregard what I feel and sometimes see.  So I put it to paper and chose a haunted house to contain it,” she says.
Although the story is fiction, many aspects of it are drawn from the author’s real life. The house in which the story is centered, Bill and Jessie’s house, is based on an actual house in the Georgetown area of D.C., once owned by Georgetown University as student housing and finally sold after being riddled by a litany of haunted happenings reported by students. Joyce Keating studied at Georgetown and knows the house well, even having stayed in it at one time herself.
Bill & Jessie’s House is available in paperback on Amazon for $23.95, and Barnes & Noble.com
Also by Joyce Keating: Denholm’s Wife
(Signed/personalized copies are available for 20% off: Email jrkliterary@verizon.net)